After being woken by a bird (I presume) that sounded like a Guinea pig, and not being able to figure out how to use the coffee machine I headed out to explore the ‘hood. I picked up a coffee and a migas taco and walked west toward downtown via the Blanton museum of art. Housing a permanent exhibition of art from the Americas, the contemporary galleries displayed a refreshing Latin (and female) perspective on the rise of American abstract expressionism. The temporary exhibition was a retrospective of Eva Hesse and Sol Lewitt’s drawing experiments and how their relationship spurred each other on to challenge themselves. The musum’s main Atrium houses a commisioned permenant installation by Teresita Fernández made up of thousands of tiles of incandescent turquoise, giving the space an almost Mediterranean or Arabian feel.

A postcard later, I pushed on downtown to see if I could so some sxsw. The chaos of sixth street pushed me into the halcyon coffee shop for a recharging snack of Nutella crepe and an iced coffee before wandering about the ‘interactive’ trade show in the convention centre hall. I thankfully managed to pick up some free t shirts ( I  didn’t bring enough) and some temporary NASA tattoos.

As the sum went down, I went to the river to watch the bats fly in and out from under the congress bridge. They squeak a lot. 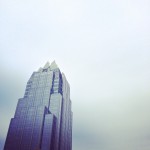 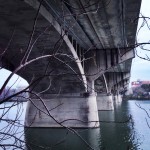 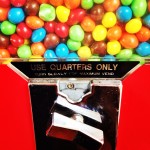 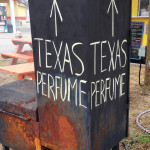 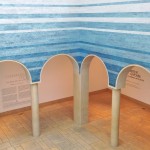 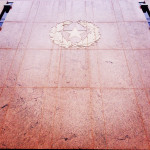