Luckily I awoke to the sound of the underground (literally – the metro is below our hotel) as the shutters on our window betray any sense of the time if day. I was worried that we almost ‘Did an Osaka’ (where we slept in until 3pm due to the effectiveness of the curtains), but we did make breakfast.
We spent the morning down at the main area of the Duomo Catholic cathedral and galleria vittoro emanuelle (cathedral of shopping).
The Duomo was breath taking in terms of scale and craftsmanship, you can only imagine how other-worldly this monument to god would seemed in it’s original splendour when the marble and stone would have been bright white and the copper and brass untainted. The gargoyles were as insane as ever with disapproving Nobel beings, peasants intestines spilling out, angry wild animals and mythical creatures in abundance.

The galleria was also very impressive with its nineteenth century exuberance. A mecca of posh shops (and a maccy D’s). After making sure we span round on the magic bulls testicles for good luck, we stumbled through the glass ceilinged arcade a little bemused from the midday heat and in need of a decent cup of coffee (surprisingly, the standard of the black stuff has been a bit disappointing – I’m yet to find anything that matches a Waterloo tea house cappuccino!).
After crossing town to the parco sempione we spent an hour in the aquatico civico, the city’s free aqurium. Debbie does enjoy a good aquarium, and despite being a bit modest was a well air conditioned way to see some fish.
This evening we dined along a canal in the navigli district while the mosquitoes dined on us and had a delicious gelato shaped like flowers on our walk back uptown to the hotel. 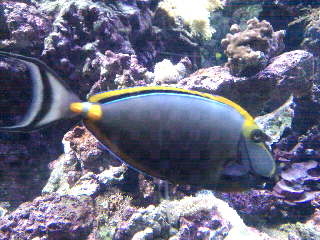 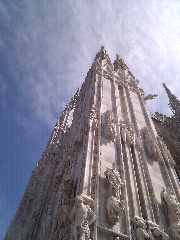 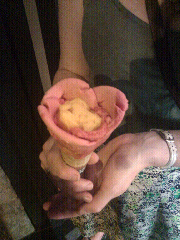 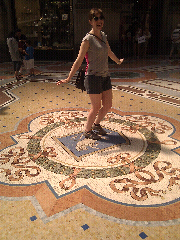 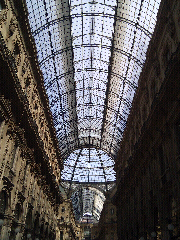