I was thinking just the other day that something was missing in my life. Not physical things – I have an amazing girlfriend, a house, a cat, a speedy bike and just about enough gadgets (although a DS would be nice). No I realised I was lacking a certain ephemeral something. I tried some yoga, meditated for a few mornings, had a chat with the Jesus, sat under a tree with Buddha, but nothing was filling me up. Then I remembered! I haven’t done my blog in a while – that must be it. Let’s see…
Well January was a bit bonkers – I turned 30 for one.

Normally getting older doesn’t bother me, and indeed the past decade or so getting older has seemed to equate with life getting better, more together and despite time speeding up, has generally been a good thing. Not 30. something hit me for a good week and I still don’t know what it was exactly – maybe it’s the realisation that I haven’t achieved quite what I was expecting as a boy dreaming of life in my 30’s – I’m not a millionaire for one thing and I’m constantly being reminded by all the hep young talented twentysomethings that this is their time – they’ve got the skills and drive to get them where they want, they’re telling me to step aside granddad or something. Debbie reckons I get moody every year around my birthday, and indeed I do use the time for reflection and gathering myself ready for a new year, but this year I felt blue.
Anyway, that’s all passed now and I’ve begun teaching basic web stuff at two (count them) different Universities and despite me almost cacking it before each lesson, it’s all going along just fine so far. I’ve been drafted in on more than one occaission to another design studio to help out in a freelancing sort of way and the weather has been sunny for almost a week now. Things are groovy.
However, since turning 30 one thing has truly made me a MAN. No, I haven’t wrestled an Alligator, and I haven’t killed another life with my bare hands (yet).
A few weekends ago Debbie and I hired some industrial machinary and I sanded the bedroom floor. Don’t snigger, it was hardcore. we spent two days dressed up in protective clothing, ear defenders, safety goggles and dust masks and shaped those muthaluvin’ planks of wood with so many expensive sheets of sandpaper (starting with a coarse and ending on a smooth fine) and felt the onset on vibration damage through my arms with the glorious tone of tinitus ringing in my ears. 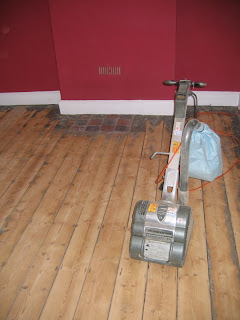 I’m not much of a DIY person truth be told, but damn it was satisfying. going from warped, dirty and painty boards so a smooth pine finish with a beautiful grain shining through. The plan was to do my studio room too, but once we began, that was thrown out of the window. It’s a nasty job (I know a man who charges £400 a day to do it) and I wouldn’t do it again in a hurry, but now I have the knowledge, it’s one less thing for me to be afraid of once the apocalypse comes.

Twothousandandeight – Don’t be late back on the horse. (not that one)