Dr sketchy’s miss out of the world beauty pageant.

After going up to the north Wales and Chester’s Dr Sketchy’s Cream Tease last year, I was very excited to be asked back up for their fist ever miss out of this world beauty pageant life drawing event. Inn the weeks running up to the evening, the Facebook page was awash with anticipation and ideas for outfits – as this sketchy would coincide with madame ex’s birthday, so an after hours space disco was planned with a pretty much compulsory fancy dress code. So after the three hour train to Chester, I made it just in time to Don a lick of silver face paint and take my seat amongst my fellow intergalactic sketchers.

Normally the Dr sketchy events have a handful of models and burlesque performers taking part, but as this was a pageant, no less than thirteen hopefuls from around the local galaxies, some professionals, but also some first timers giving it a go for fun, were in for a chance to gain the judges favour and win the chance to be the queen and mating partner of High Priest from planet Vaginus (Neil ‘Nez’ Kendall)  Needless to say the dressing room was a chaotic disarray of silver and gold body paint, clouds of glitter and the odd green bosom! The proceedings were orchestrated and watched over by Madame Ex and judged by the High Priest along with Mavis (Titsalina Bumsquash) a kindly old lady from Yorkshire who thought she’d been asked out to the bingo. With such a healthy number of contestants, each model held a small number of quick poses for  approximately  the length of one space themed tune. This did mean s fast turn around of sketches – much to the occasional gasp from the slower drawers, but being used to drawing quick fluid sketches of live music, it was personally a fun challenge. Posing for the drawing was the lovely Treena Angel as cosmic princess, Lolli Liqueur from the Glitterati constellation, and Miss Pepper wearing an authentic 1950’s burlesque outfit – fantastically authentic cheesecake tease. After the contestants who were purely modelling had done a turn, there was a quick break for punters to get a drink from The bar, a space cupcake from the cake stand and to fix any wonky false eyelashes.
The second half of the pageant allowed for the performers to entertain. Alfie Ordinary & LeLig – Baldonia aka The Wig Brigade astonished onlookers with their anti-burlesque tale of lust and procreation. princess Leia performed a feat of the force. The two headed gold skinned ‘beauty’ from ChhHhkakkaherhap bemused with their conjoined savage display of  strip ‘tease’. Velma Vimto from the Planet Powder Puff showed off her assets with kitsch sweetness, Uranus showed us her *ahem* and the night was rounded off by Susie Sequin leading the audience in song – glitter shorts saved my life.

Once it was over, the chairs were cleared, yet more outfits were changed and the disco rave began!

More photos from the event here

My sketches from the night: 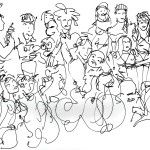 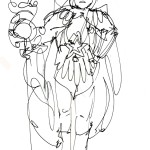 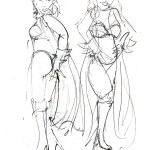 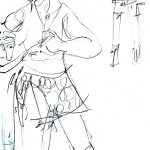