Again I feel I need to begin this entry by aplogising for not updating my blog enough – crazy really because I doubt anybody reads it ever – but to just make sure they don’t I’ve added the google analytics thingy to it.

the last few weeks have been a bit of a whirlwind really – started a work placement at rouchcollie a few weeks ago to hrelp out on projects in any way I can with my limited skills and with any luck get to tr my hand at After Effects and Cinema 4D on real projects and for it to give me enough momentum to carry it on! along aside that I had been finishing off a few freelance project – not least doing some marketing materials for the moviemogulfund which is begining to take off – and is in Cannes all next week. I’m not going unfortunately, maybe next year eh? I’ve also been working on graphics and brochure for the Hay fringe festival, a community run festival that runs along aside the main hay literary festival in Hay-on-Wye funnily enough. It’s been a last minute rush on both of these projects meaning 15 hour days and late late nights (it’s been a shock to my pussy-footin’ system ), despite me promising myself and my long suffering girlfriend that I wouldn’t leave it until the last minute. Pah! where would the fun be then? 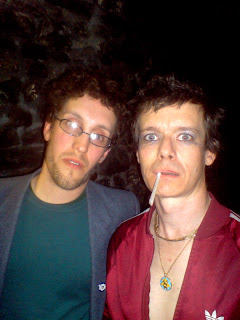 A couple of weeks ago I went to see Bobby Conn play in town! I love the chap – it’s the pompus-glam orchestration mixed with end-days paranoia that makes it for me. I took my good friend Jon along for the ride and he loved it to bits. It began a little awkwardly: the place was half empty (half full) and when the band came on, Bobby looked a bit ‘oh great – nobody here, what the hell’ and they raced through nearly the whole of the new album with no chit-chat as if in dire desperation to kill this gig asap. However, after the forced encore they cam back on with a hell of a lot more gusto about them, maybe the first half had made them sad because the front-mans wife was looking after their newborn, rathe than playing rock-violin in South Wales. whatever it was it was banished and the second half was blinding! And yes – I got my photo taken with the chap. he does look a tad terrified, and I do look rather gormless, but that’s rock and roll. Isn’t it?