Toot toot, all aboard!

Belated Monday 18th April
Well, this is a report on the first full day at sea. I did write a rather long post yesterday on our first day of travel and my initial apprehensive thoughts on the  matter of spending the next week on a cruise ship. Technology failed my uploading and seemed to have erased my post, so I will consider it gone and attempt to carry on writing this blogiary over the coming days – both to satisfy my ego (which I failed to destroy during a lucid dream two nights ago) and empty my potentially cabin fever-addled mind.

After arriving in venice yesterday morning, the three thousand or so passengers were herded into a large ferry terminal and set on quite a protracted embarkation procedure.
Once on board I do think the fear began to set in. overtly shallow musak was playing out from the piano over a budget midi backing backing track and the glowing tack of italian inspired chintz felt a bit over whelming. Lunch was rushed at a seemingly plastic inspired canteen and the fare was also a bit sub par while looking out over venezia port through salt-stained windows. it all felt a bit like euro-butlins, which is what debbie kept jokingly saying it would be like, but neither of us seriously thought it would be. The evening was a bit non descriptn, supported by an okay meal from a heavily vibrating dining table.
Tuesday 19th April
Okay, so I sound like a hater, like I haven’t given it a chance, and you’d be right – that was my feeling before a good nights sleep. Upon waking from the deepest sleep in a while (there are no windows in our cabin, so when the lights are off, it’s hella dark) and made my way to the gym for an abdominal workout (it’s my mission to develop something of a fitness regime this holiday). In the light of a new day the trypta-ketamine-esque decor no longer seemed quite nasty and over loading. On one hand this made me feel a little calmer about the situation, but one does worry that my psyche is actually getting used to the merry prankster nightmare that is passing as interior design on this vessel.
The day was mainly spent in port at Bari. We couldn’t find the pleasure island with log flume, but did marvel at the catholic opulence of Saint Nicholas’s cathedral and the towns ancient castle, washed down with an icy biera and creamy gelato.
Wednesday 20th april.
After a more restless sleep, we woke fairly early for morning stretches which appeared to target the same muscles that got pummeled during the ab workout the previously morning, and then discovered pancakes, bacon and maple syrup for breakfast.
The food on board is an interesting affair. There are a few places to chow down on during the day and night, and although the sit down restaurants offer the illusion they are of a higher class than the buffet canteens, it’s pretty much the exact same fare. On the whole the munch is pretty fresh and fairly varied. There is also 24 pizza available by the slice and I’m making it my duty to consume at least some every day.
Feeding times do tend to expose the dark under belly of our fellow passengers though as the scrummage that ensues at breakfast and lunch can be a tad disturbing. Admittedly it’s a bit confusing initially that the trays and plates are made of the same material and are of a similar size, but a size difference enough. The concept of self service surely implies that one can return to the buffet for seconds, but a large number of people pile up huge mounds of carbo-combos onto the trays as though it will be their last meal for days. In fact it feels as though you needn’t go longer than half an hour without consuming something on this floating behemoth. I’m quite enjoying this store of grazing, but the obtuse greed all around still disturbs me. 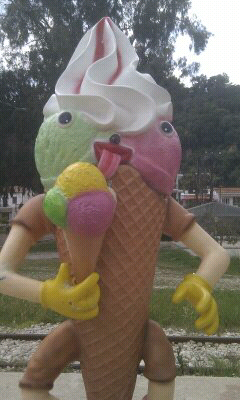 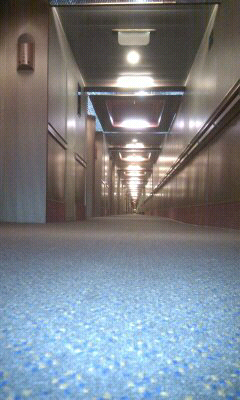 Toot toot, all aboard! Yissaou!