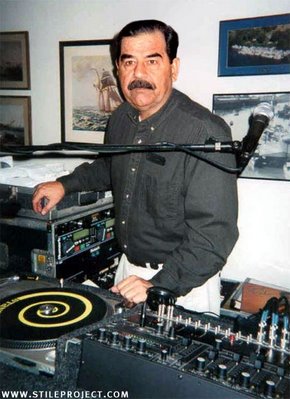 Saddam Hussein: Sentenced to death for the 1982 killings of 148 Iraqi people in the town of Dujail.

G.W. Bush: President of the most powerful nation on earth after presiding over an illegal war based on lies that has killed over 650,000 Iraqi civilians.

He was a murderous, nasty and often down right crazy leader (shooting relatives over dinner because they didn’t agree with him kind of nuts), but lets face it – you need one hell of an insane mofo to keep Iraq in order without it falling into tribal and civil war – look what’s happening there right now I’m suprised the US didn’t ask him to get back into power after the mess they’ve made. Before Saddam was captured, I used to have a re-occuring dream in which all the world’s leaders were at a dinner party (I’ve no idea why I was invited), Tony, Bush and Hussain were always there, and Saddam was the life and soul of the party – well read and full of wisecracks. A lovable rogue. As the US government used to call him in the 80’s.