Well it finally feels like the shock of the new is wearing off. No, I’m not talking about Contemporary art’s 20th Century rebellion against the bourgeois, I’m talking about my new haircut.
For those of you that don’t know, I got a haircut last week. No great shakes I hear you cry, but all weekend, if I wasn’t getting blanked, I was making ladies cry and being shunned by hippies. In the middle of last week, I had got so fed up with my overly long unmanageable head of hair I decided I’d stop off at the first barbers I walked to. Normaly I’d go to my wunderbar hair-dresser Lisa (in fact she’s the only person I’d normally let near my locks), but she’s on a four month work placement in Turkey, so no can do.

I felt I wanted a smart, but still Vagabond cut, in fact I’ve been trying to get a trim in the style of Robert Altman in the Long Goodbye and I’ve long dreamt about walking into a real man’s barber saying ‘like Bob Altman in the Long Goodbye please – the Barber knowing exactly what I mean because it’s one of his favourites and we both wax lyrical about being detectives, cats and good film endings. 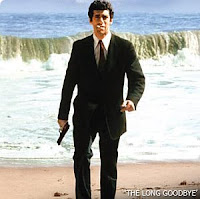 Last Thursday was not to be that day.
I popped into said ‘first baber I come to’ and pointed at my unruly mess of hair. The young Turk looked afraid (I don’t actually know if he was from Turkey, but due to the reputation of Turkish Barbers he’ll be Turkish just to give the story a spin). I sat in the chair. Between my morning brain and his lack of English, we both agreed that just a trim, or ‘middle size’ was the order of the occasion. However, his tentativeness and confused look led me to say ‘it’s okay – you can make it shorter’….. He grabbed a handful and sliced like a butcher slicing the arse off a cow
. I let go and resigned myself it’d be short. Ten minutes and a sweet black tea later I was done. my out of control mop was an inch thick and forced combed back all over with an extra long bit at the front. Officially the worst cut I’ve ever had, the saving grace being it only cost 7 pounds Sterling.
Needless to say I went home and got the clippers out. 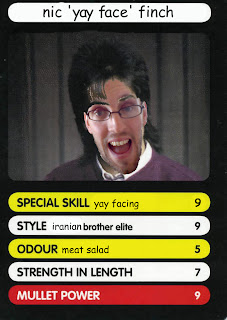 (Thanks to Anna for the artistic representation)
So Now I’m rocking a grade 4 all over and it feels good. I haven’t had it this short for about 10 years, which means most of my friends now have never seen me without curls, including Debbie my girlfriend. shaving one’s head feels like going incognito, in disguise – there’s no pretensions with a shaved head, people can’t make a snap judgment about character when there’s no style to pin point. I also think Mord my cat like me more now too.

needles Back in the USSA