Everyone is a photographer now / Diffusion Festival Platform 1

Each week throughout the Diffusion festival, there are informal presentations and discussion events providing a space to explore issues facing photography today. The first of the platform evenings was looking at the idea that ‘Everyone is a photographer now’.

The main focus was around the work and a presentation by photojournalist Matt Dunham, who works for Associated Press. Due to the nature of his work, this question and discussion naturally revolved around photojournalism and news imagery rather than photography in a fine art sense for instance.

It feels as though everyone is obsessed with taking pictures all the time these days. We feverishly document all that is in front of us, often without a conceptual filter. Everyone with a mobile phone has a camera in their pocket, and therefore are potential photographers, but that does that make us more aware, discerning and capable of taking outstanding pictures?

here are iconic images that stick in our collective memory – (the Raising the Flag on Iwo Jima, by Joe Rosenthal and the image of Phan Thi Kim Phuc for example) are well known because they encapsulate a particular, defining moment in time with one simple image. Such photographs are taken because somebody with the right equipment and know-how was in the right place at the right time, so by rights – the sheer number of extra eyes on the ground in the guise of the phone wielding public today means we should all be taking photographs that make the news.

So what makes ‘official’ photographers and their photographs of an event so special? Is it the access to areas that only a ‘photographers’ pass can get? Is it professional training, artistic ability, or just plain luck?

In the case of Matt Durham’s photograph of Charles and Camilla fleeing student protests, Matt claims he was essentially lucky and had his wits about him. He had seen what looked like a royal car coming his way so prepared himself to be as close as possible. Indeed those around him were also brandishing cameras, but few of them were looking for a shot to encapsulate the tension of the scenario with the added bite of showing the protest from the perspective of the privileged.
Being in the right place at the right time with a particular intent and practised eye is what bagged the image. Of course working for AP may have helped get it published in the papers the next day.

What then of ‘citizen journalists’ that are touted as the great news media democtratiser?

There are incidents when mainstream press haven’t been the first channel to deliver breaking stories. The London tube bombing was one such event that realised the potential of having millions of potential news photographers on the ground: as phone footage from inside the tunnels was the first view of the aftermath broadcast on that morning’s news. We’ve got used to shakey low bitrate video footage on our TV’s and don’t find a low resolution phone snap in a tabloid newspaper particularly surprising any more.

The recent Boston marathon bomb was a case in which most official photographers had left the main road after documenting the main race and were in hotel press hospitality suites downloading their pictures when they heard the blast. It was opportune members of the public, likely filming their loved ones coming late into the finish line that captured the actual blast moment that was then splashed across rolling news and the next day’s front pages. However, it was photographs from determined photojournalists prepared to flaunt police lines in order to get pictures showing emergency services at work, intimate portraits of the injured and in shock that provided a more human view of the aftermath of the incident.

Despite agencies such as AP striving to deliver ‘News’ as unbiased, honest and ‘true’ as possible, it is the artist’s subjective eye and strive to encapsulate an event or moment in the most compositionally interesting yet universally telling way that creates a newsworthy image of artistic merit. It may be naïve to think aesthetics do not play a role in the way photojournalists tell a story, they have control over composition, light and a degree of darkroom processing that all alter the semantics of an image. 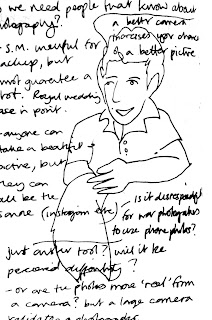 Does skill and technique amount to anything anymore in the age of Instagram? It could be argued that we all have the ability to produce beautiful photos worthy of print using smartphone apps such as instagram and hipstamatic.

The photojournalist Damon Winter came under critical fire when his iphone Hipstamatic pictures of American servicemen in Afganistan were published in The New York Times. As a professional, the use of a civilian tool such as a phone app could be seen as gimmicky and a means to over-process and aestheticise news. It can be assumed it is easy to take interesting images using a phone camera, but at the core of every solid image are essential ingredients: composition, information, moment, emotion and connection. These are skills learned through formal training and practice. Damon argues that using his phone put him on more of a level playing field with his subjects and allowed him to gain a more intimate portrait of grunt life than brandishing his large professional SLR ever could.
We are all capable of great photos, and there are likely quality images being taken of events by the public that aren’t seen on front pages, but those trained in getting them are considered the most reliable, and working for a news agency guarantees to a degree that images used are trustworthy and authentic.

Many of us live life through a screen and many of us incessantly record what happens in front of us with no goal or objective. In terms of archiving modern living as a documentation of events, it seems we are all potential photographers, but it’s the few key images taken that can tell a story beyond face value that become powerful signifiers of event and iconic images in their own right.

Taking another bite out of the apple.

Getting Down the Garonne