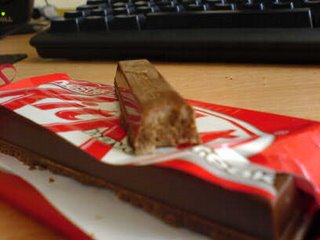 Well there I was – fending off a mid-afternoon pang of choco need, so I popped down to the cornershop, and bought myself a KITKAT. I always feel a bit guilty buying them because Nestle apparently rape babies (RAPE BABIES I TELLS YA!) but they do taste good. Just that right balance between chocolate and wafer.
NOT THIS TIME! I got all Kit (the chocolate) without any KAT (the wafer). I was shocked and amused – at first anyway, I mean it’s not everyday this sort of wonder happens is it? I ate the first finger, assuming all would be normal on the second, but AGAIN! it was solid chocolate. I then took a photo about half way through before finishing it off. I was going to save the last two fingers to send back to nestle, but I got hungry a bit later on and ate them too. I’ll probably still send them the wrapper and an angry letter of course.

weeky Dead Animal Round up