I’m hoping that my body clock and sleeping patterns are so thrown up and sideways right now, that when I get back to the UK, I’ll sleep so well I’ll be right as rain for work Monday morning. Stranger things have happened.
Which is how I had a 2pm breakfast (despite waking at 9am) in the Kerbey lane cafe, a typically  Austin take on the American diner – all fresh juice, responsibly farmed produce and tacos on the menu along aside French toast and burgers. I was proper stuffed after my short stack of buttermilk pancakes 🙂

Checking out the Guadalupe road area around the university campus, I found a few decent thrift stores and an arcade bar playing punk rock in amongst the coin-ops. Seeing as I’d had a 2 o’clock breakfast I headed south to take in some of the south of the river vibes at Barton springs — a natural spring that is open for a short period every year for the public to swim in. Unfortunately the pool was shut for cleaning, but there was an area a little along that had people paddling and soaking up the sun. Feet all refreshed, I had to get downtown to get some music in me. I wanted to catch up with gulp and some of the contingent Cymraeg, so I went along to the turnstile records party at the st. David’s epistle church. It is a bit odd going all the way to Texas and hang out having a drink with a room full of people from wales, but it was a good night. Gruff Rhys played a lovely set accompanied by kliph Scurlock on drums, and Cate le Bon blew me away, despite having seen her a number of times – the sound and energy the band produced was great. 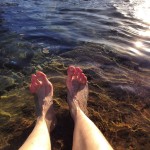 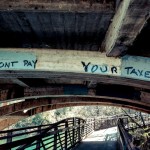 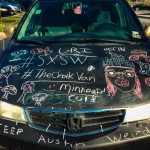 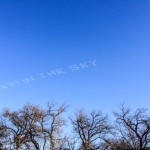